Hype Energy is excited to announce the latest addition to its premium energy drinks range.

Indulge in tropical temptation bursting with energy. An intensified taste experience with fruit juice, caffeine, five vitamins and taurine to deliver maximum energy. With a premium, refined flavor and an incredible attention to detail, our brand new Twisted line up packs a punch with maximum flavor and mouth watering refreshment. Serve chilled.

Add a Twist to your routine and savor the sweet, summer taste of Twisted Cherry Punch. A sweet cherry flavor refined through added fruit juice. Its unique blend is strengthened with five vitamins, caffeine and taurine to provide maximum energy with no compromise on taste. Serve chilled. 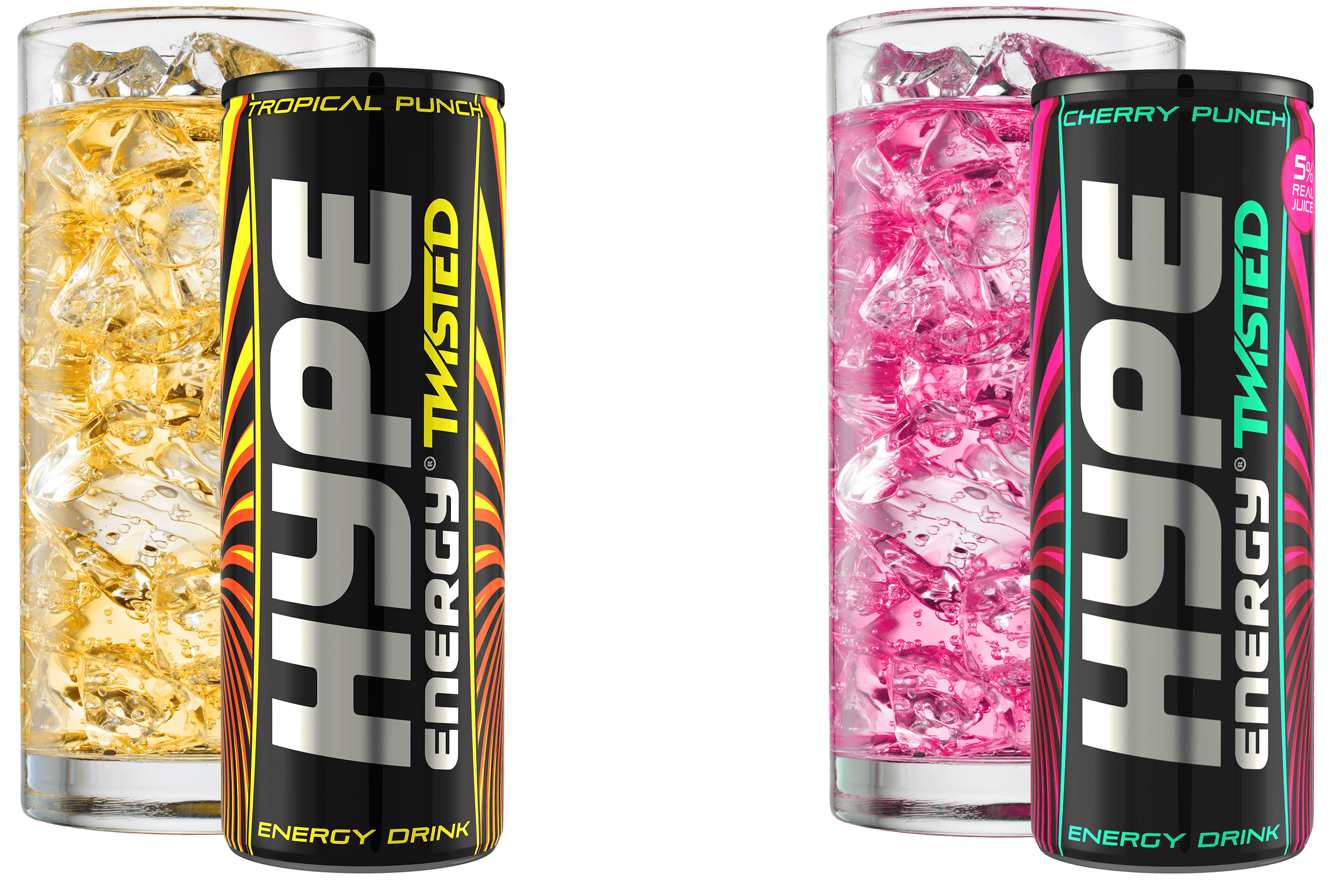 Amidst the glitz and glamour of the F1 finale in Abu Dhabi, Hype Energy launched its brand new Twisted line up. Overlooking the track and surrounding marina from the Sahara Force India F1 team rooftop terrace, we were joined by a host of guests including Sahara Force India drivers Sergio Perez and Esteban Ocon, team officials, journalists & media from all over the world, fellow sponsors and YouTube star Ben Daly (Tiametmarduk). 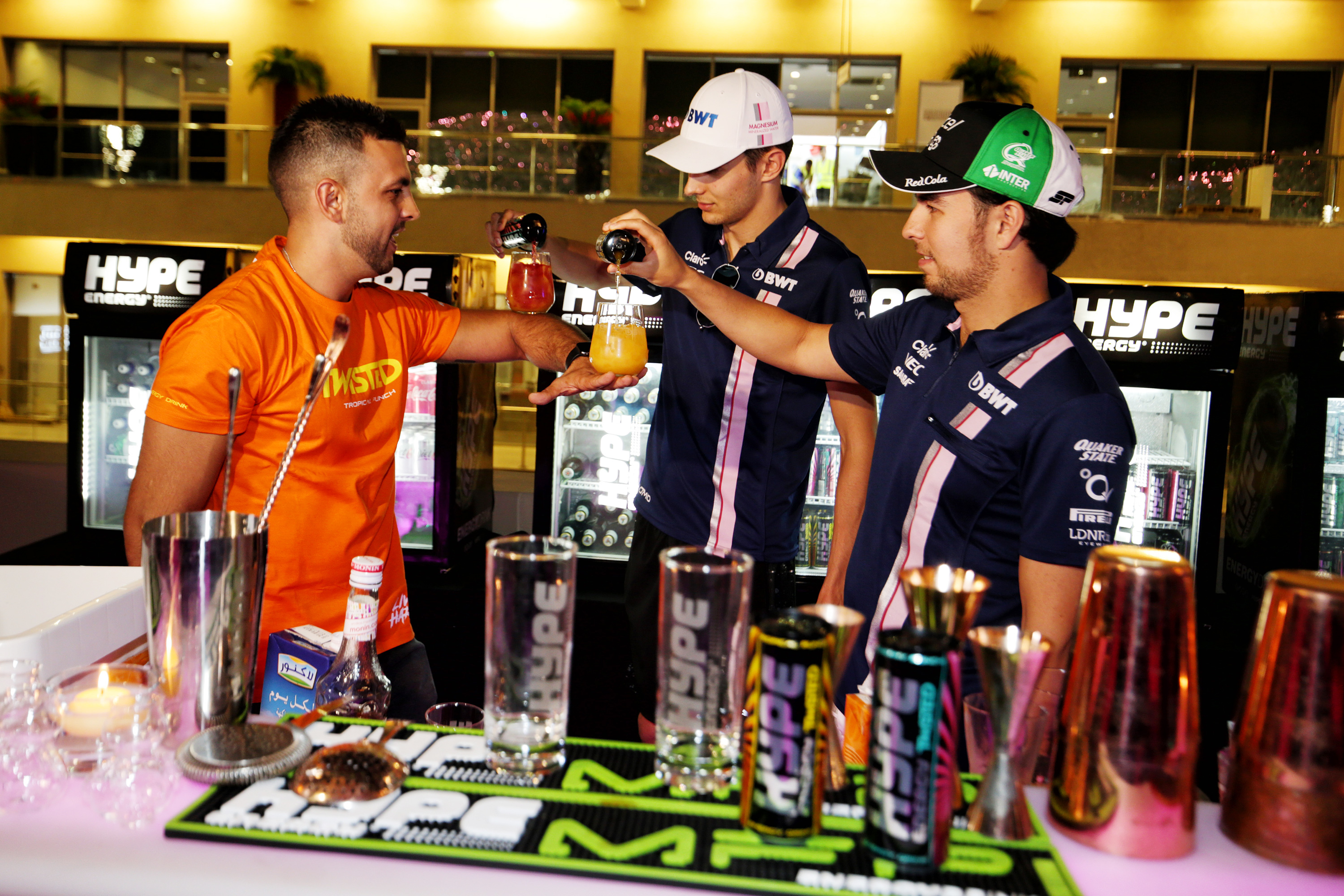 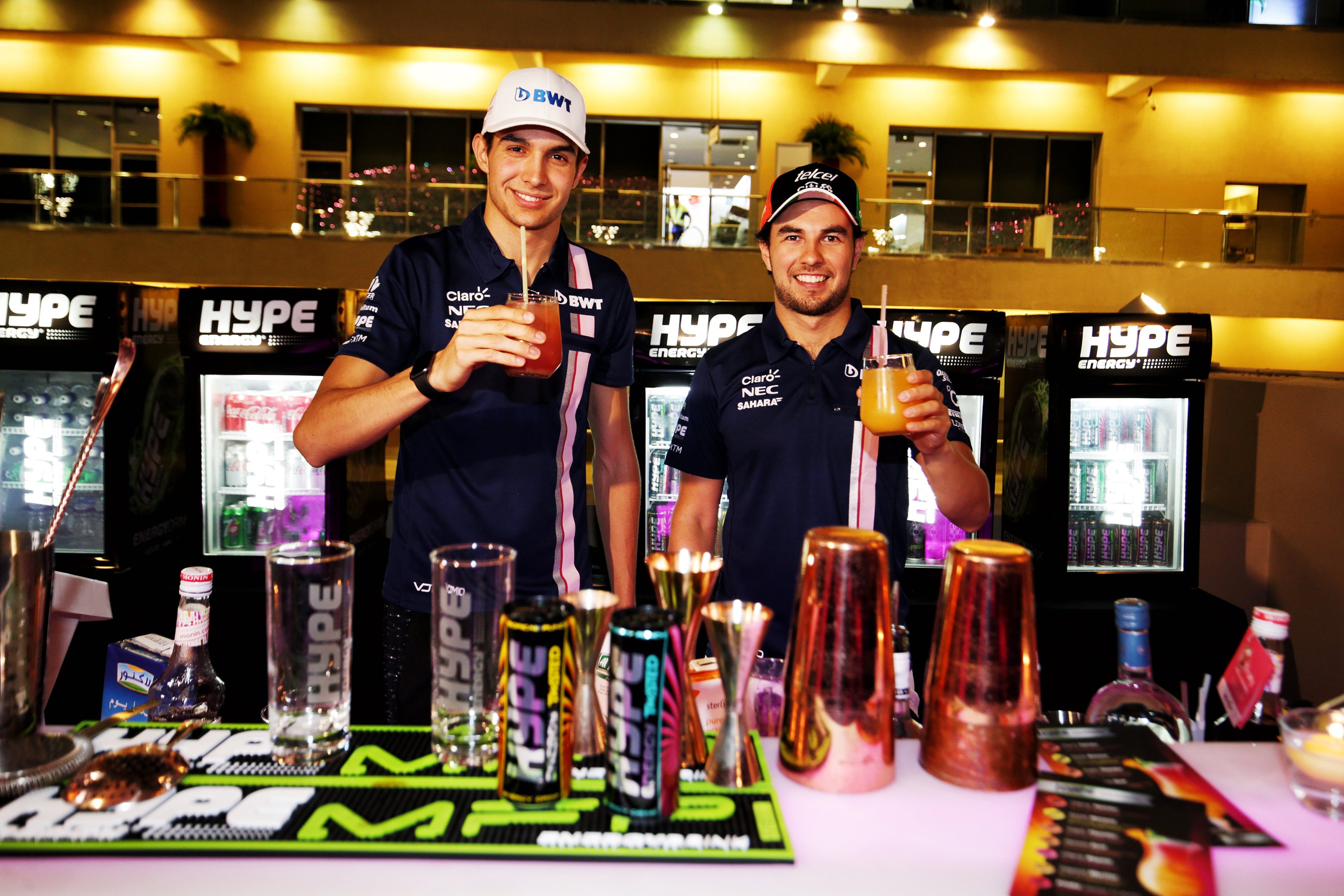 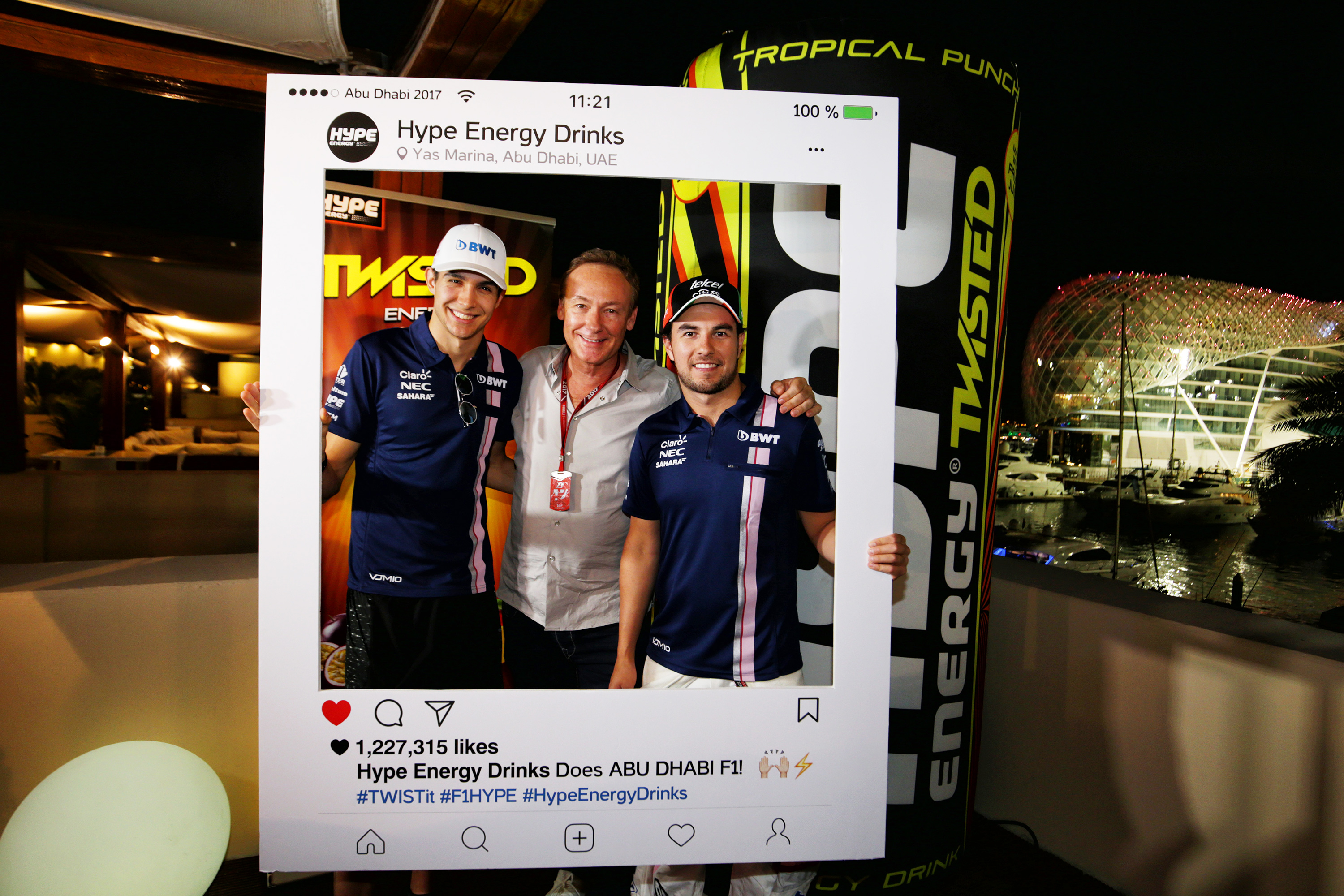 Our ambassadors have already tried Twisted, and they love it as much as we do. Take a look at some of our athletes and sponsors with our bold Twisted can designs. 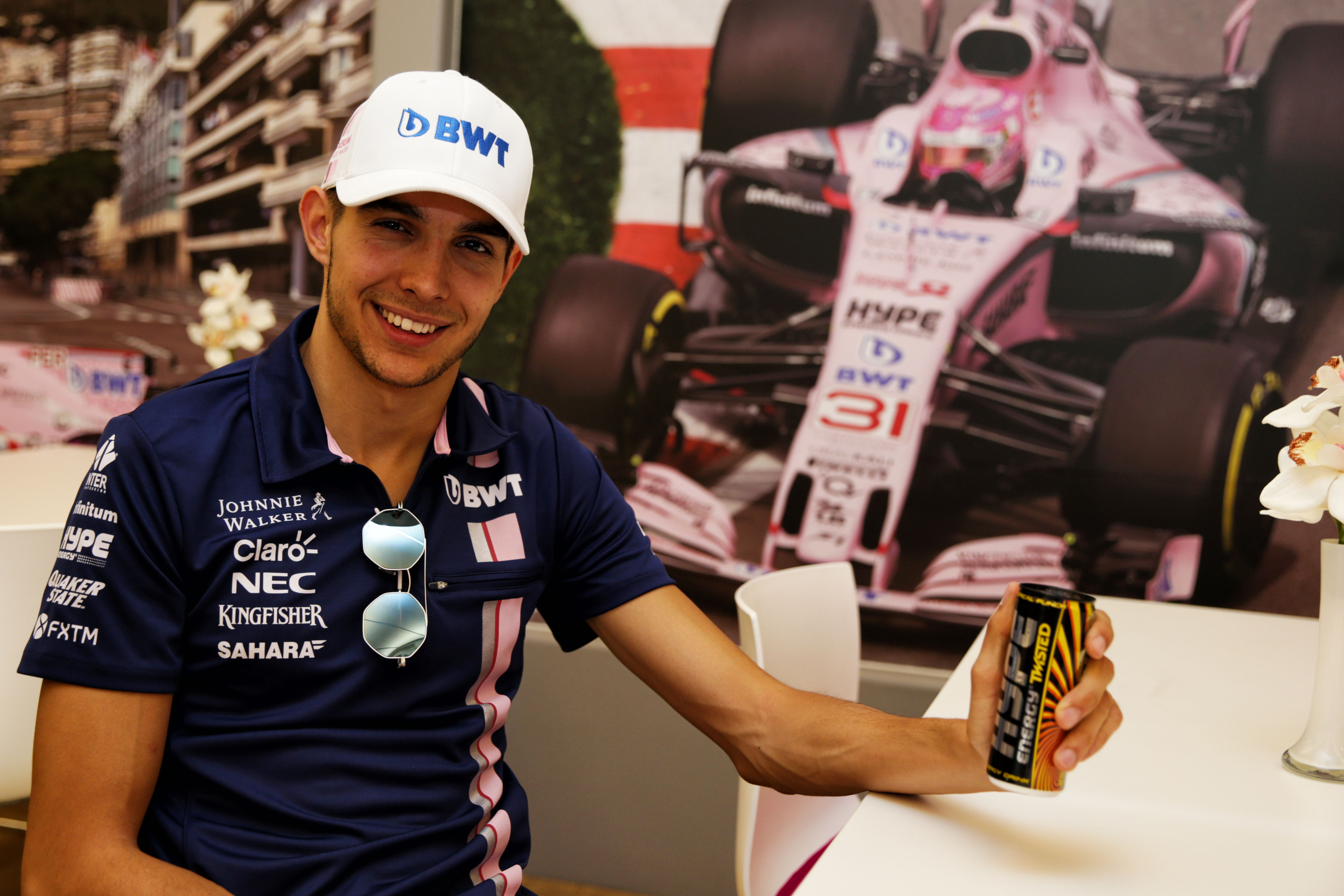 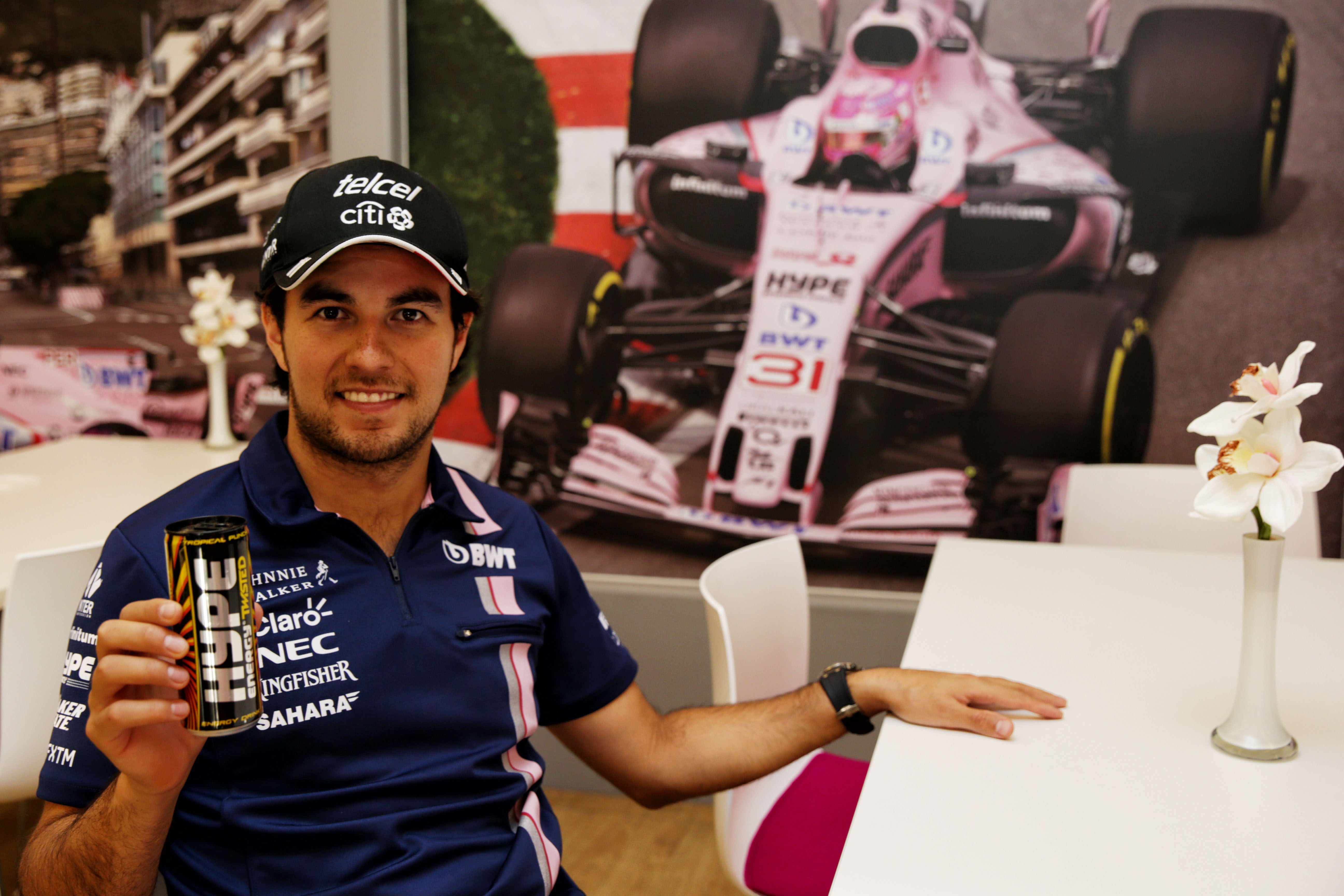 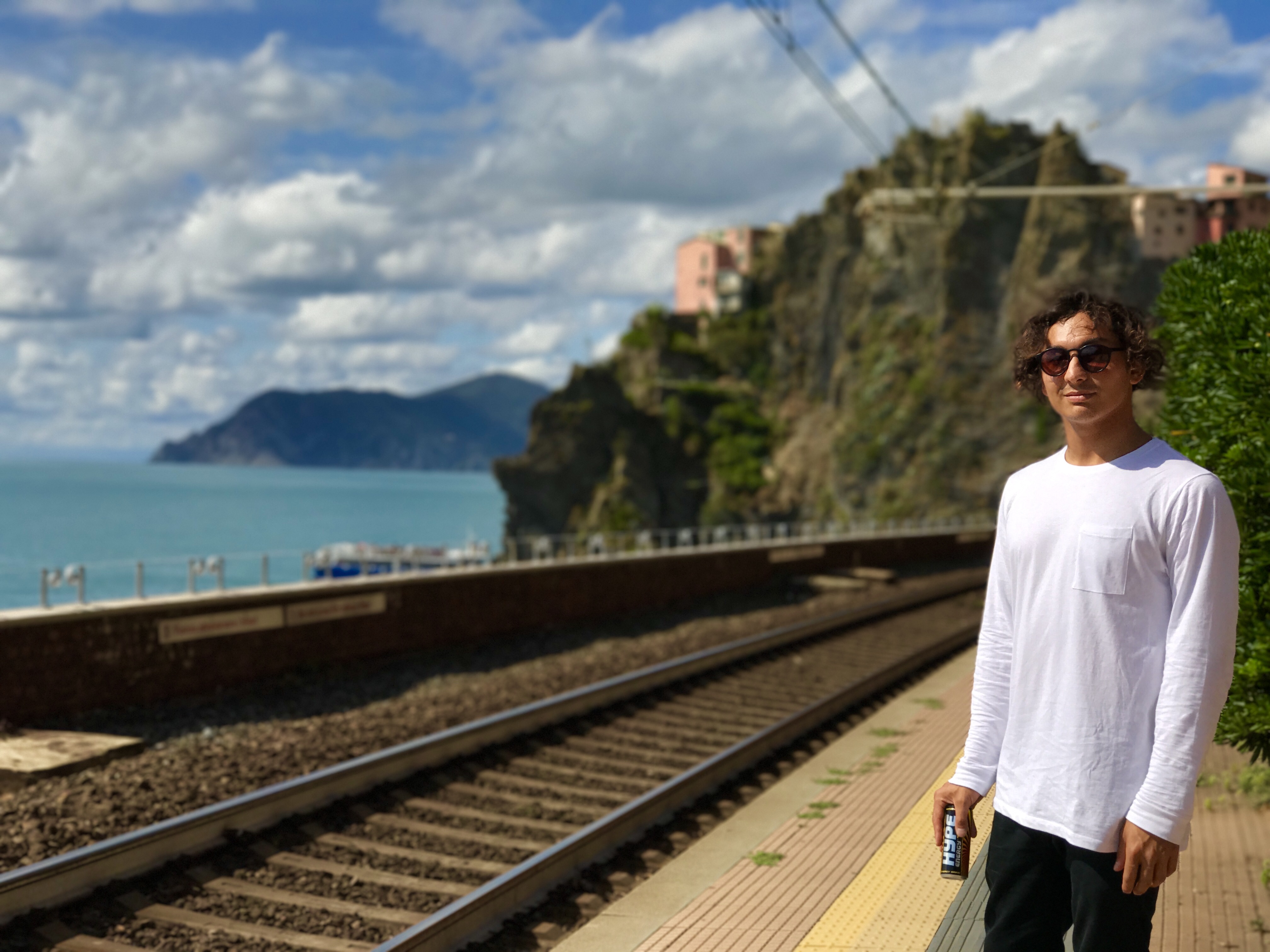 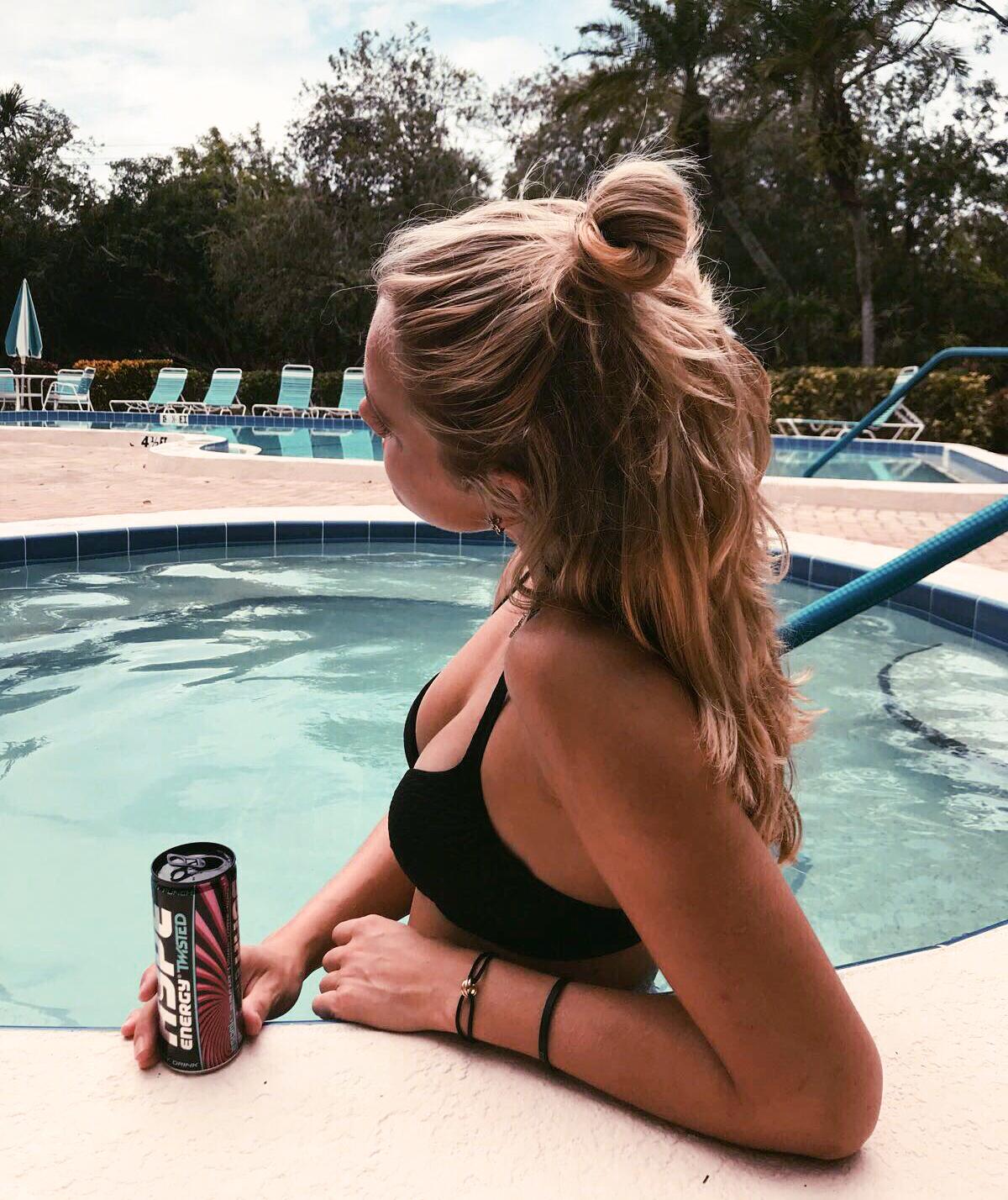 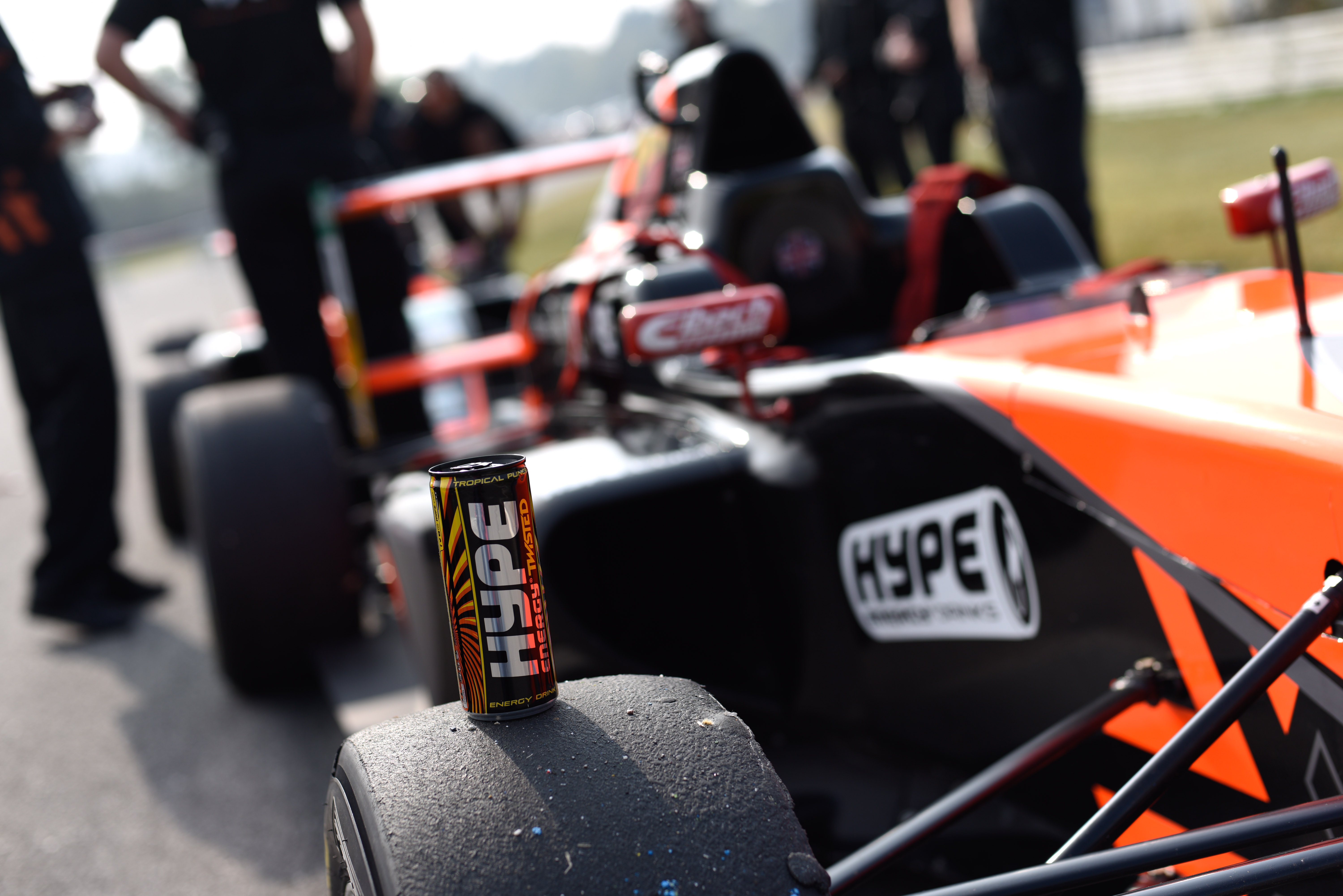 After a record breaking 2016, Sahara Force India had a lot to live up to in a year of regulation changes and the arrival of a young, rookie driver named Esteban Ocon. Not only have they hit the ground running, they did it in style and they did it in pink. 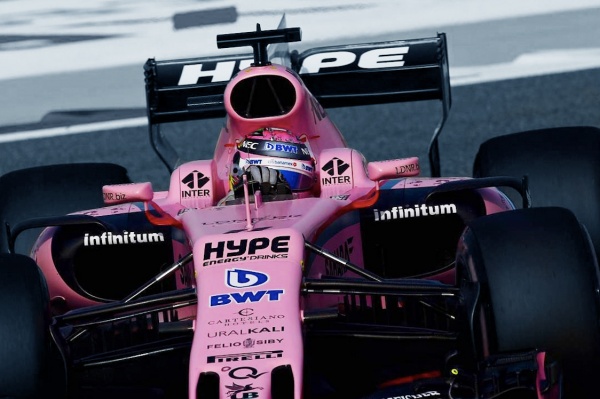 Energised by Hype Energy, the team achieved 4th in the 2016 constructors’ title for the first time in their history, with driver Sergio Perez claiming his highest championship finish of his career, both drivers and team exceeded all expectations.

Yet that wasn’t enough. This year, the team is sitting comfortably in 4th place with memorable races in Spain and Canada providing important points in the tight race toward the end of the season.  Sahara Force India have raised the bar yet again, and Hype Energy have been there every step of the way. 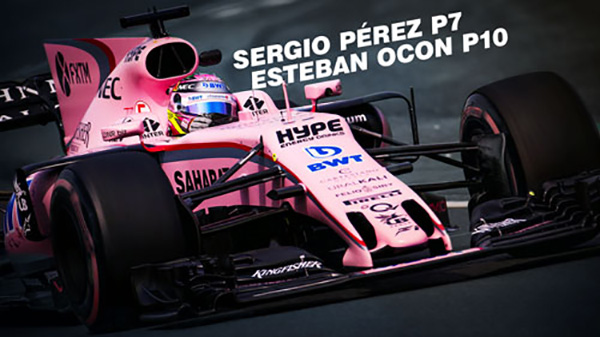 After a deserved break and fresh from a record breaking season, a solid double points finish with striking new livery set the foundations for another strong year for the Sahara Force India F1 team.

With both drivers making up positions from out of the points, the weekend confirmed the solid race pace and raw potential of the VJM10.

Another double points finish for the team hid a great display of overtaking skill and precision from both drivers. The first Q3 appearance of the season for the team from Sergio Pérez showed not only is the VJM10 quick on a Sunday, it’s just plain quick.

A stellar drive from Esteban Ocon saw him rise ten places in the race and secure more valuable points in only his first season. 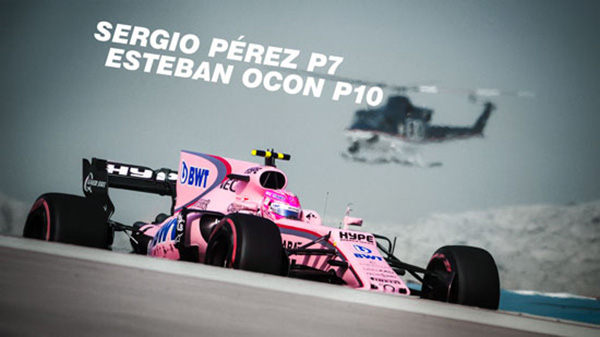 This year at a hot and starlit Bahrain GP, Hype Energy hijacked the Sahara Force India team’s rear wing and took centre stage to remind teams and fans about Hype Energy’s Formula 1 heritage. Featuring alongside familiar branding around the cockpit, nose cone and air intake, Hype Energy kept the drivers topped up as they came home with their third double points finish out of three. 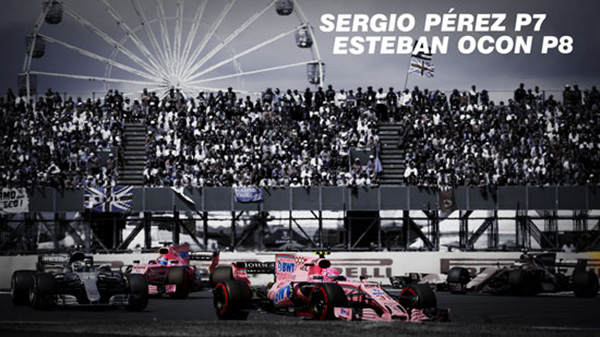 In Russia Sahara Force India continued their charge into the 2017 season by finishing with both cars inside the top ten to make it four in a row.

Carving deep into the front of the field with 6th and 7th place finishes, the pink panther began to cement its status as one of the fastest animals on the track. 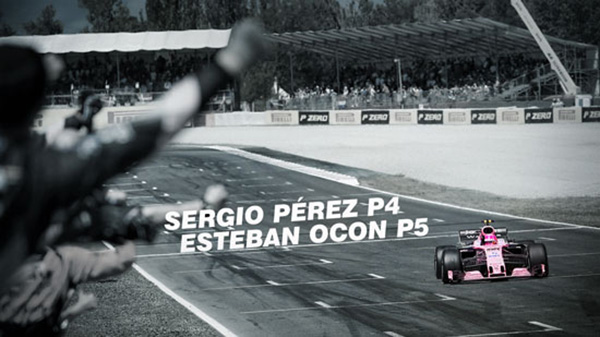 Qualifying in 8th and 10th respectively, Pérez and Ocon both drove incredible races to earn the team a whopping 22 points and narrowly missing out on a podium finish. Moving themselves out of reach from the midfield, the team continued its march up the grid to the delight of the Spanish fans. 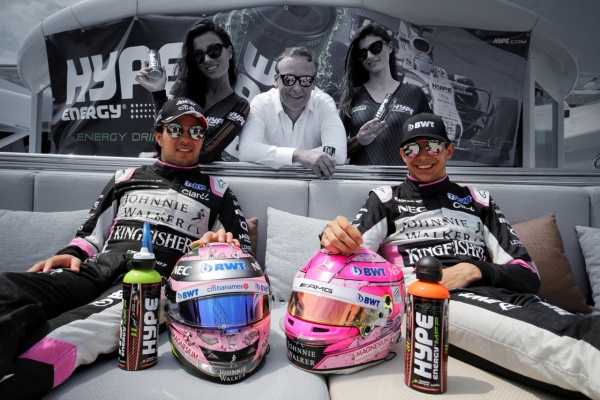 Glamorous, gorgeous and jaw-dropping, the Monaco GP has it all. And what better way to celebrate it than with the Hype Energy team on a yacht? At a weekend where Pérez scored his highest qualifying finished of the season, the team finished a mere two seconds out of the points, and had plenty of positives to take from the principality into Canada. 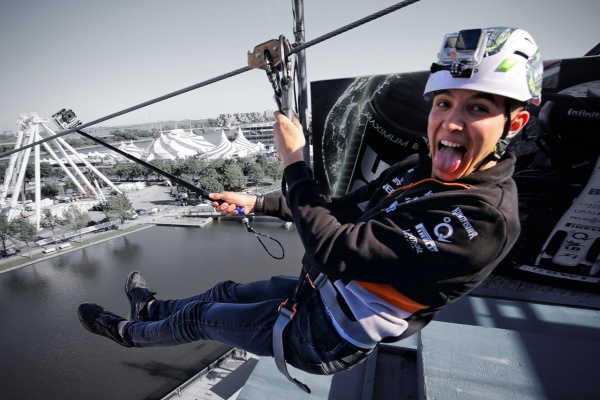 At a track where the team drove deep into the points with 5th and 6th, Sahara Force India added another haul of points to their already heavy pot. And as if that wasn’t exciting enough, Hype Energy brought a zip line to the Canadian GP to spice up the show even more. 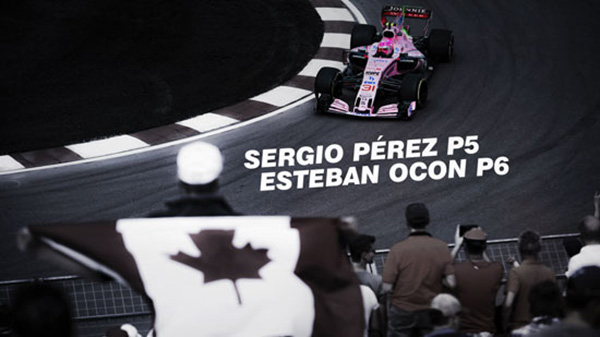 Taking in views of the paddock, river and the circuit itself, Hype Energy’s no nonsense approach to sight-seeing went down rather well with Sahara Force India driver Esteban Ocon and Sky F1’s David Croft. Hyped and high above the St Lawrence river in Montreal, it was an adrenaline fuelled afternoon of high-altitude fear. High time to settle down and kick your feet back with an ice-cold can of… 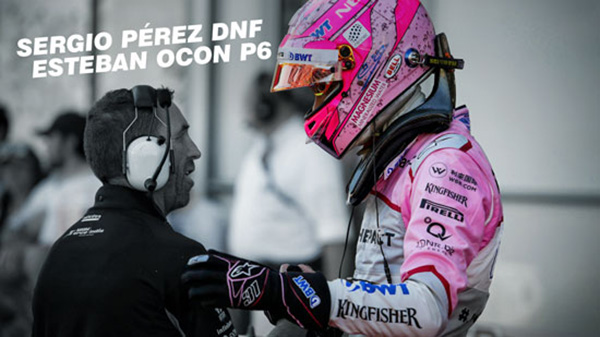 In a chaotic Baku Grand Prix, the team bagged another 7th place qualifying result with Sergio Perez and another extraordinary drive from Esteban Ocon to bring the car home in 6th, and brought their constructors tally up to 79 points in 4th place. 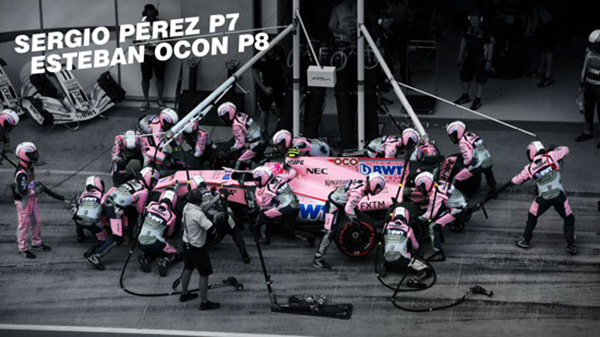 Austria was the seventh time the team brought both cars home in the points, the regular finishes deep into the top ten began to show a familiar pattern was emerging. The VJM10 reliably showed it could battle with the big teams and became a constant presence in the mirrors of the front running teams.

Based just outside the gates of the centre of British motorsport, the Force India team call Silverstone home. An eighth double points finish whilst at your home GP gives reason enough to run towards the nearest Hype Energy fridge for a cool and celebratory drink, but if that wasn’t enough, how about last lap tyre delamination’s, crashes and intense wheel to wheel racing? 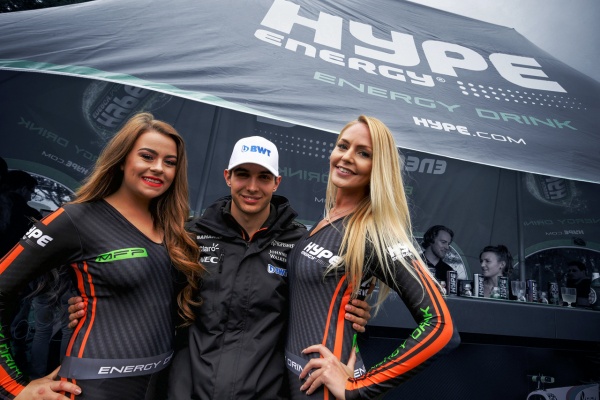 2017 has provided plenty to cheer about for Sahara Force India and Hype Energy fans, they arrive at the halfway point of the season with over double the constructors points of their nearest rival and show no sign of slowing down soon.  Hungary is up next on the calendar and offers another chance for the Hype Energy sponsored team to show why they live ‘Maximum energy’.

Beverage giant to expand its distributor and retail network after Gulfood 2017.

Hype Energy returned for the 5th year in a row to Gulfood 2017, the region’s largest food and beverage trade platform, to further consolidate its footprint in the Middle East while looking for expansion opportunities in Asia. 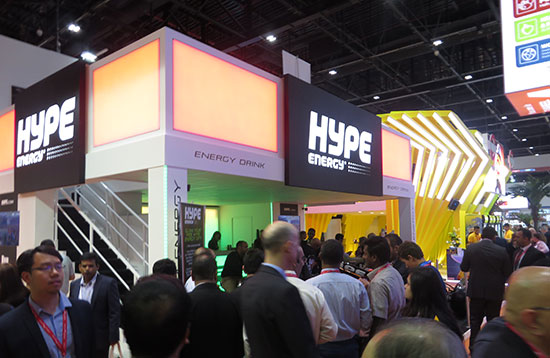 Internationally renowned as the lifestyle energy drinks brand, Hype Energy drinks sales and marketing representatives were on-site to share their upcoming endeavours with F1’s Sahara Force India team, top music celebrities and urban sports; as well as the newest innovations and drinks to introduce to the FMCG beverage market. 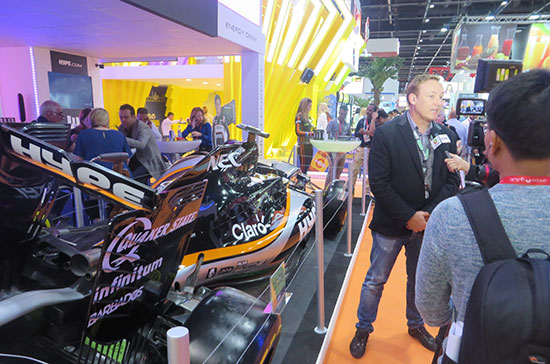 Hype Energy’s sales forecast for 2017 is a minimum of 200 million cans, a 25 percent increase from 2016. The global soft drinks market is expected to grow at a rate of 2.4 percent worldwide this year, while the Middle Eastern and Asian markets are predicted to expand by 4.3 percent over the next five years, showing immense opportunities and avenues for growth for Hype Energy.

We are celebrating a successful 2016 F1 season with the release of this beautiful product.

Hype Energy are pleased to announce the release of a brand new limited edition product featuring their sponsorship with Sahara Force India F1™ Team in 2016.

For the second year running, Hype Energy have been a main sponsor of one of the top teams in Formula 1. The energy drinks company decided it was time to release an original limited edition can dedicated to their F1 partners. 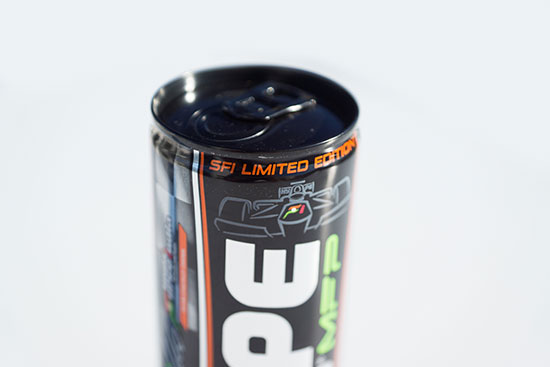 The new design features the official Sahara Force India F1 Team logo, along with the names, racing numbers and signatures of the 2016 team’s drivers Nico Hülkenberg and Sergio Pérez.

Hype Energy has always had a strong affiliation with motorsports. This is amplified by the fact that Hype Energy drinks’ CEO, Betrand Gachot was a former driver for Sahara Force India’s predecessor Jordan GP, and Le Mans 24 hours winner. The new can clearly fits Hype Energy’s philosophy and origins!

Have a look at this beauty! 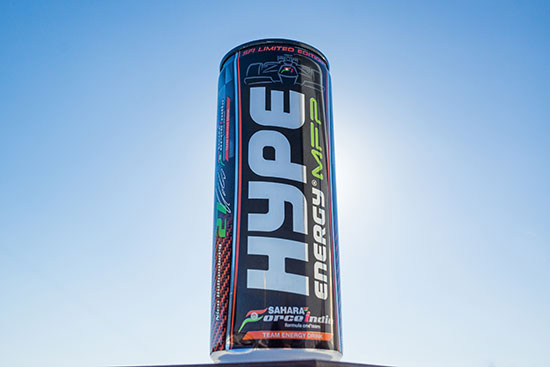 Fast, furious and fun. Three words that perfectly describes windsurfing and Hypes weekend to Tarifa. Full of color, excitement and adrenaline, it was a pleasure to watch kite surfers swiftly drift around the sea. The only potential fault of the day was that it was incredibly hot, luckily the Hype team had cold, tasty cans of Hype Energy to help cool them down.